Support CADC in the upcoming elections, donate to the CADC-PAC today. 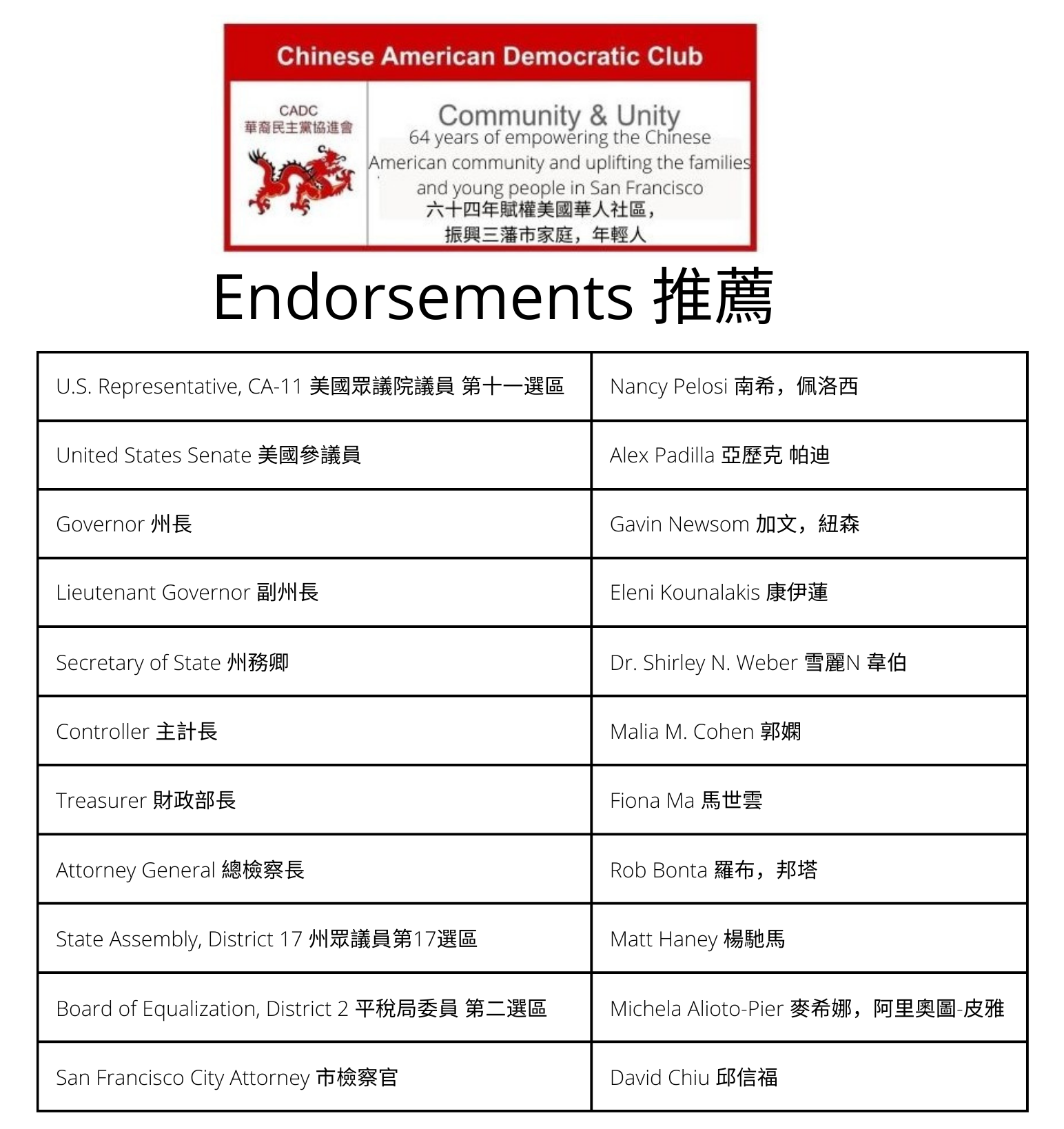 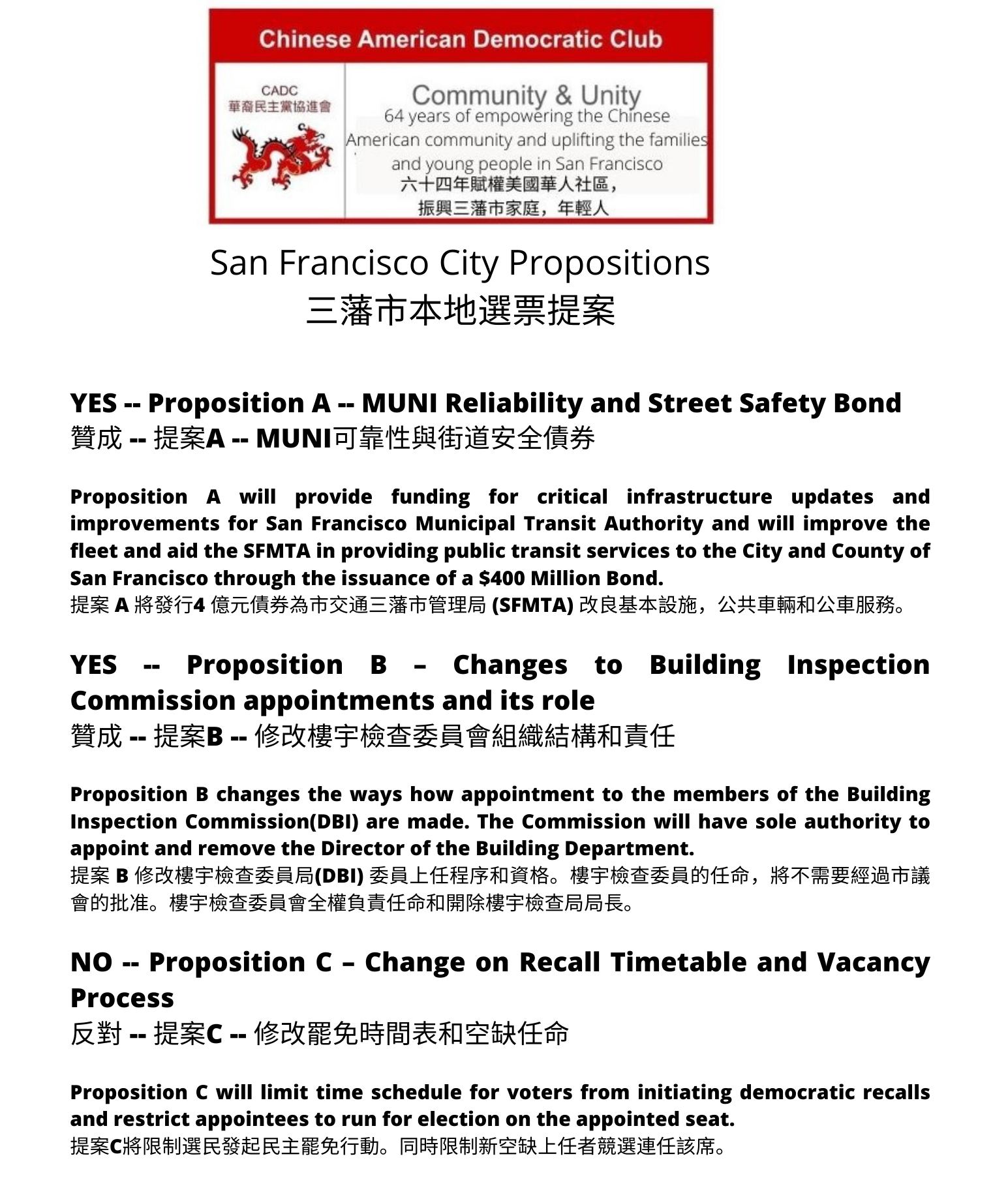 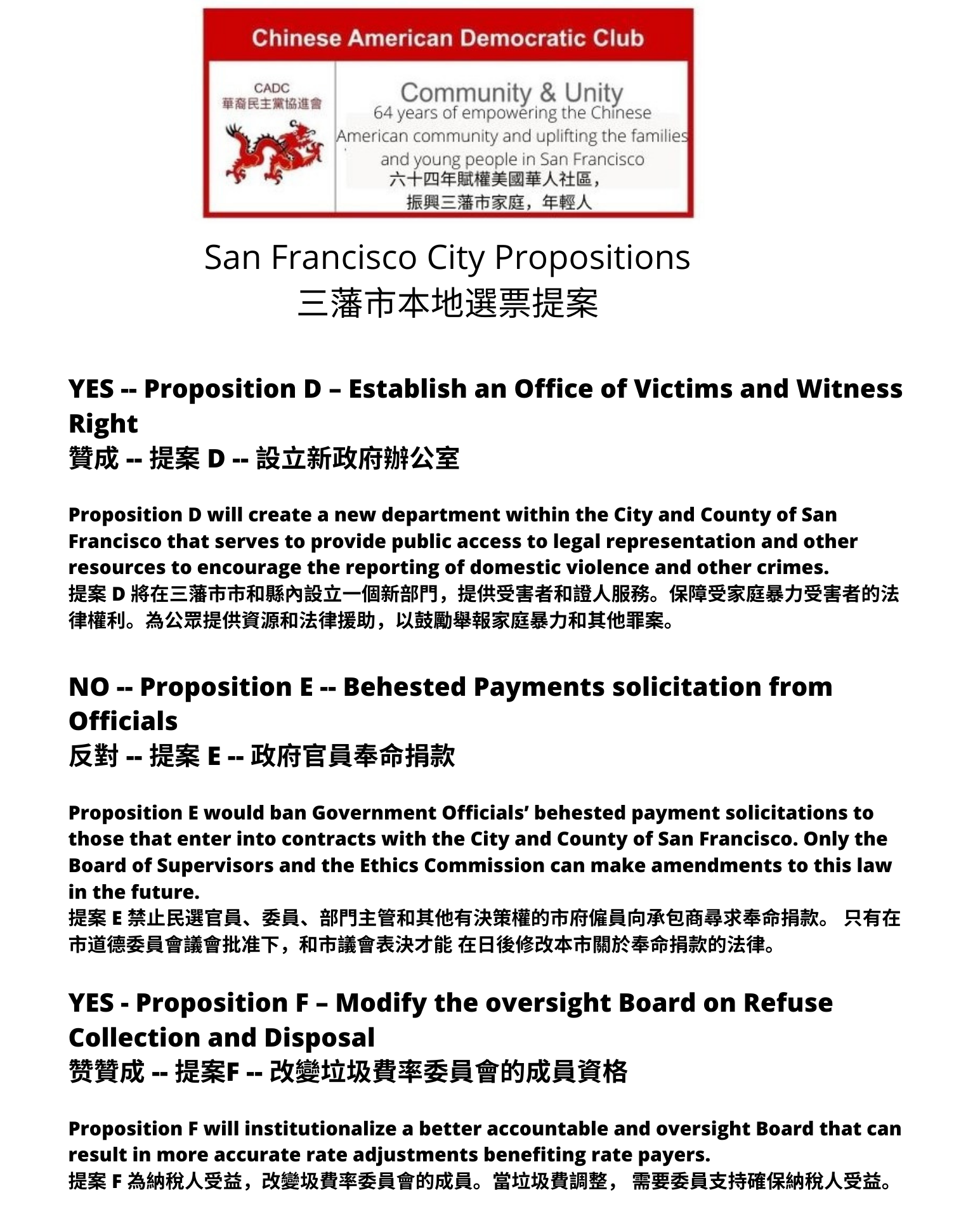 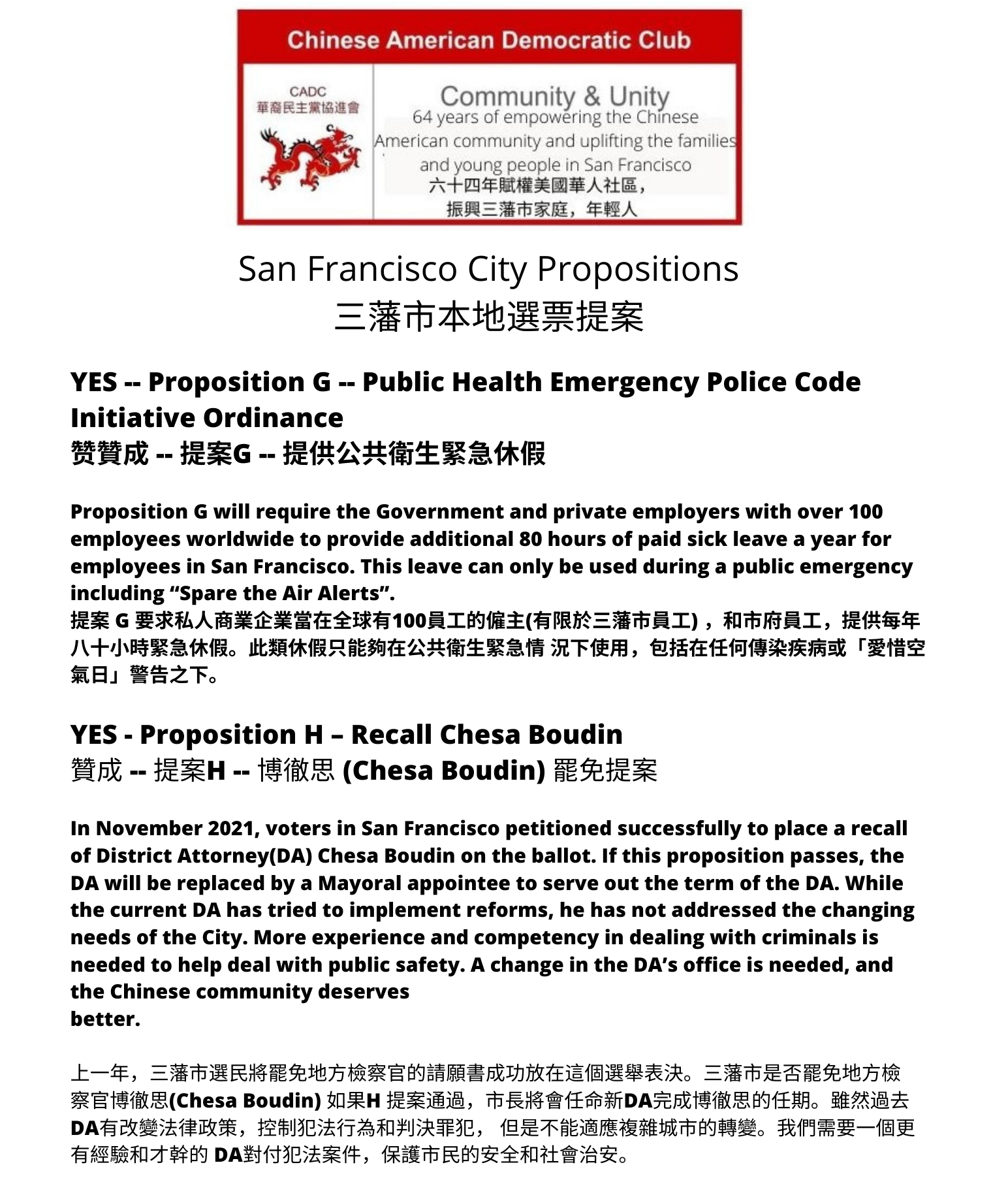 Proposition A will provide funding for critical infrastructure updates and improvements for San Francisco Municipal Transit Authority and will improve the fleet and aid the SFMTA in providing public transit services to the City and County of San Francisco.

Proposition B will promote tenant safety and habitability and reduction of Commissioner conflicts of interest.

Proposition C will limit voters from initiating democratic recalls and unnecessarily restrict appointees to vacant seats from running for that seat.

Proposition D will create a new department within the City and County of San Francisco that serves to provide public access to legal representation and other resources to encourage the reporting of domestic violence and other crimes.

Proposition E would serve to extend the reporting requirements of behested payments to those that enter into contracts with the City and County of San Francisco and if adopted would create a great number of procedural hurdles to effectuate future changes to the behested payments legislation.

Proposition F will institutionalize a more accountable and oversight system that can result in accurate rate adjustments benefiting rate payers.

Proposition G will promote public health benefits including Spare The Air Days by ensuring that the sick and vulnerable or those who come to the aid of a household member do not infect others.

CADC Statement on the DA Recall

In our efforts to attain an informed understanding, we reached out to Asian Americans in law enforcement, law administration, and community leaders to gain a greater perspective and insight into this complex issue. There were many positive statements about changes DA Boudin has brought to the office since he took office. These included hiring more Asian Americans and elevating them like Kasie Lee to the head of Victim Services, language classes for staff, and the first ever AAPI Elder Abuse Steering Committee.

While his term has been impacted by COVID and the rise of AAPI Hate, it can be easy to blame him for the challenges brought about by these outside factors. It would have been a very clear error if he had not sought out the support and input of the many Chinatown non-profts. And as with the many recalls we've seen recently, is there a reason we should take a position now instead of allowing the DA to finish his term before we evaluate the balance of his efforts.

Thus we had to base our decision on if he has competently executed on his policies and priorities with regard to the immediate challenges being faced by the DA's office. In his campaign he elevated a progressive view based on a decarceration platform of eliminating cash bail, establishing a unit to re-evaluate wrongful convictions and refusing to assist Immigration and Customs Enforcement (ICE) with raids and arrests. Since DA Boudin entered the job with little if any prosecutorial and managerial experience, this shift would always be fraught with challenges to implement smoothly.

Many would like to blame these policies for any changes in crime in San Francisco, but the DA's office is but one part of the criminal justice system. The DA has made it clear that ultimately the individual decisions on court cases come down to the Judges in the case. Also, the police have their responsibilities in investigating and catching criminals with the Sheriff's in monitoring those that have been entered into the justice system. This does not leave the DA's office blameless in this system where there may be many points of failure and a shared responsibility. As such, the DA's office relationships with the other partners in the criminal justice system was considered.

So has the DA's office balanced all these many pressures in this exceptionally challenging environment? He has told us to look at his record and understand what he is currently doing in the community. His focus since the Recall was put on the ballot has been to go out to Chinese Media to explain his Diversion priorities and the mechanics of them while more recently helping the community deal with nuisance lawsuits. While it is his prerogative to lean on the message of rehabilitation, there has not been enough responsiveness to the calls from members of the public to focus on safety. By no means are we asking for perfection out of the DA's office since they have admitted to mistakes having been made and room to improve. But with no clear victories of this decarceration, rehabilitation, or reform process platform, why should the community continue support on this current pathway when this brings harm not only to victims but also to the individuals that aren't being put on the proper paths to rehabilitation?

Because of the complexities involved, these were pro's and con's that had to be weighed. From the many inputs we received it became clear that trust of the DA's office as a collaborative element with the current criminal justice system has been severely tarnished. The internal changes at the office, while reflective of the policy changes, has left the office bereft of the experience needed to deal with new challenges of COVID and the rise of AAPI Hate. This is not a repudiation of the decarceration, rehabilitation, or reform process platform, but it has become clear that DA Boudin is unable to balance this message and policy direction with the message and perception of public safety. We cannot wait for the DA's office to continue along a path of "learning and growing" and so we cannot support a no position on this recall election.

A new DA is needed now to be an experienced leader that can address the challenges facing the community now by working with the media, the partners in the criminal justice system, and not just focused on ideas and policies that we'd fully support in a world not beset by COVID and rising AAPI Hate.